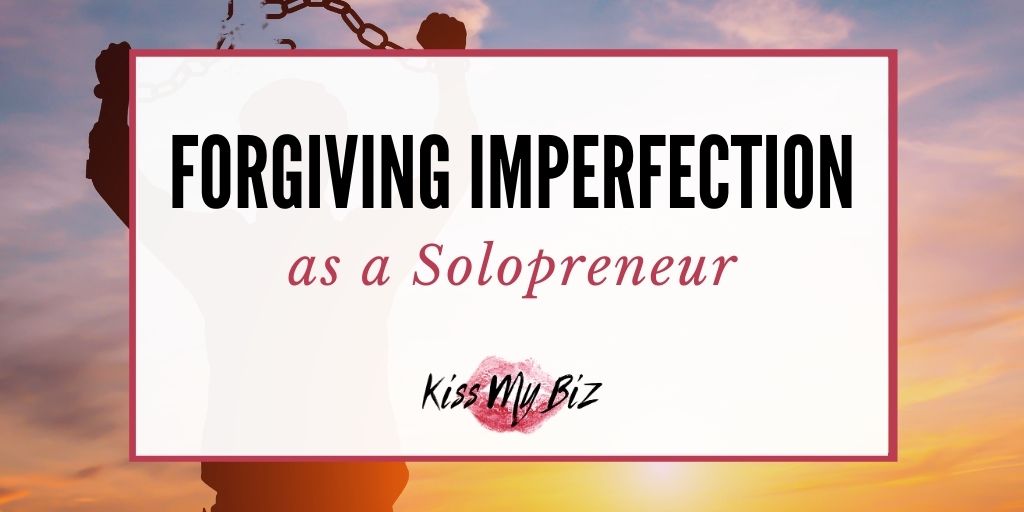 Working as a solopreneur poses numerous challenges. But one I’ve struggled with most over the years is learning to forgive, forget, and move past imperfection.

When working for someone else, unrealistic goals often fall on a manager. And they either handle it well, learning from mistakes to better handle planning the next go-around. Or they handle it badly, placing blame and more demands on employees to make up for their mistakes.

It’s different when you’re both the “employee” and the boss.

This can be difficult for overachievers like me. It can be even tougher when you’re a perfectionist.

Challenging Yourself vs Expecting Perfection

I’ve thrived in business despite numerous setbacks, from a variety of personal crises to health issues, by continually challenging myself. I’ve long considered that essential if you want to learn your limits.

Along those lines, little disappoints me more than reaching all my goals. What that tells me is I didn’t challenge myself. I didn’t push to be my best. And, as a result, I’ll never know what I really could have accomplished in that time.

So basically, I go into planning knowing up front that not everything is likely to get finished. Instead, this works by focusing on priorities.

That said, I’m not a glutton for punishment like I was when I first went into business for myself. You can’t push yourself at this level all day, every day, trying to go further than you initially believed you could.

That’s not healthy. But by operating this way during my work time alone (and knowing how to separate that from my off-time), I’m able to successfully manage my career working just four days per week. That leaves me more time for other things I care about, more time for rest, and ultimately this approach drastically improved my productivity.

But there can be a fine line between challenging yourself in this way and expecting perfection from yourself.

Every now and then, even though I’ve been doing this full-time for nearly two decades, I still get caught in the trap of getting hung up on imperfection.

What Happens When You Harp on Imperfection

People deal with perfectionism differently. For me, though, when I get stuck in this mindset, even a small failure can become crippling.

I nearly allowed this to happen this month.

After a long hiatus for most of my blogs, I decided I was finally ready to rebuild and get everything back to a semi-regular schedule again. I thought I was phasing things in well enough. I re-launched three blogs in January and hit every target post, plus a few extra. Then, this month I added the next three blogs to the mix.

That meant the plan was to go from three weekly blog posts (plus an extra or two) to at least six blog posts per week. I own far more than this and have for a long time, but these are the main blogs that would require regular updates. The final step would be adding one more blog in April for bi-weekly posts.

But things also suddenly got hectic.

My husband and I put our house on the market in late January. We expected things to happen quickly given the absurd seller’s market right now.

What we didn’t expect was having to prep for showings and leave our house for an hour or two nearly every evening almost right away. The only reprieve we got was from snow storms, and then we were left to worry about prep and clean-up around those.

This meant having to stop work early frequently to prep for showings, and it cost me some time. Client work had to be prioritized, and it didn’t always leave enough time for my sites. That became more true in early February.

At first, I told myself it was fine because I’d catch up. No worries. Right?

But the showings kept coming and piling up. And I was nearing burnout. But I kept pushing myself to make up the missing posts.

The Risk of Punishing Yourself for Imperfection

This left me at a crossroads of sorts. And I knew what would happen either way.

I keep pushing, telling myself it’s only one week of content and I can do this. I put in as many extra hours as possible to try.

Instead I’d be left mentally and emotionally drained, and there would be the inevitable “f*ck it” moment.

Anxiety would be high. Depression and disappointment would set in. And not only would I not make up for that lost time, but I’d likely not get back to things any time soon until I could push through an epic funk.

This would be the risk of punishing myself for failure rather than truly moving forward in a healthy and productive way. I’ve done this enough to know how it turns out, and it’s not pretty.

Forgiving Imperfection so You Can Continue Making Progress

Now let’s look at my other option, and what I ultimately chose this time around.

I can be disappointed. But I can also take it as a learning experience.

I saw what I could do. I know what outside influences are affecting me right now. And I know they aren’t permanent.

The house went under contract after a couple of weeks, and showings are now over. But I know there are other related challenges still ongoing.

Now I spend hours a day house-hunting for an out-of-state move in a buyer’s market where things are under contract almost as fast as I can find them. And we need to find a place we’re happy with and get an offer accepted before ours expires and we risk losing it (and it’s an offer we really don’t want to lose).

So I know this process is still going to take time and mental energy. Rather than trying to operate at 100% when I know that’s happening, I can forgive that imperfection and cut myself some slack.

And that’s what I’m doing.

This post is the last missing post from two weeks ago. It’s still rough trying to work all this week’s new posts in, but I’ll push myself just enough to try to make that happen.

What I’m not going to do though is punish myself for needing the week off blogging last week to deal with everything else going on here. Essential work for clients was done. Admin was dealt with. The blogs are still in fine shape even without one week’s posts.

It took me years to get the hang of forgiving failures and imperfection. But without that from time to time, there can’t be progress.

That progress can’t just be more of the same though. It requires learning from failures and adapting.

In this case, those adaptations will hopefully only be temporary. But I know there’s now the house hunt to deal with. Then the rest of packing. Then the move itself. And then settling into a new place.

This might be temporary, but it will still take months to push through before things start to feel truly normal.

So adapting means looking at what I did well — three weekly posts plus an extra or two. And it means acknowledging what was too much. Then my schedule needs to change to reflect what’s possible given these current circumstances.

For now, that means I’ll cut three blogs back to a bi-weekly schedule, and three will get weekly updates. It means last week’s missing posts are forgiven and forgotten so I no longer stress about them. And it means I might need to give myself a bit of a break this week too if things still feel like too much.

More important, it means I have to allow myself to be OK with these changes. And I am.

I know all too well how damaging it can be to be a perfectionist. But I’m also an over-achiever, so I understand that drive to push. The trick is learning how to find a balance.

Don’t punish yourself when you’re in boss-mode. Find ways to motivate yourself instead. Don’t let worker-you get caught up trying to fulfill overly-ambitious goals manager-you set without accounting for basic realities.

As a solopreneur, you’re essentially juggling two jobs. You won’t do both those jobs perfectly all the time. And that’s OK. But learn to forgive your imperfections so you can grow and keep moving forward, because if you don’t do that, no one else is there to do it for you.

Over the years I’ve been cited as an expert source, had my sites ranked as some of the top resources in their niches, and have been asked to interview with or contribute to various outlets (not including freelance work or guest posts I’ve pitched). These are some of those publications…